Bungie wanted to include influencer marketing in their marketing strategy to attract new and lapsed players for Destiny 2.  To successfully reach these audiences, we wanted to do something special. We teamed up with Lekker Spelen, one of the biggest streaming duos in the Benelux, and let them create their own Destiny 2 merchandise. Their fans got to watch them live on stream throughout the whole process, playing the game for inspiration, designing an exclusive Destiny 2 themed T-shirt, and finally revealing the result. From start to finish, Lekker Spelen supported the streams with unique content on their social media channels. Fans were extremely interested during the campaign and eventually went crazy during the reveal. When the T-shirts went on sale, the site was shortly unavailable due to much traffic. In the end, the T-shirts sold out within an hour of going live.

Almost 83,000 unique viewers (100% organic) watched the Destiny 2 branded streams on Twitch and YouTube, while the social media posts created a positive sentiment during the campaign. 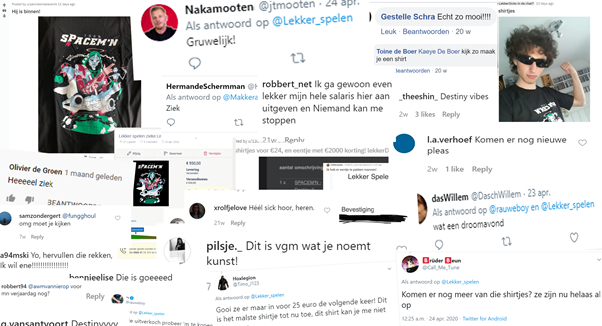